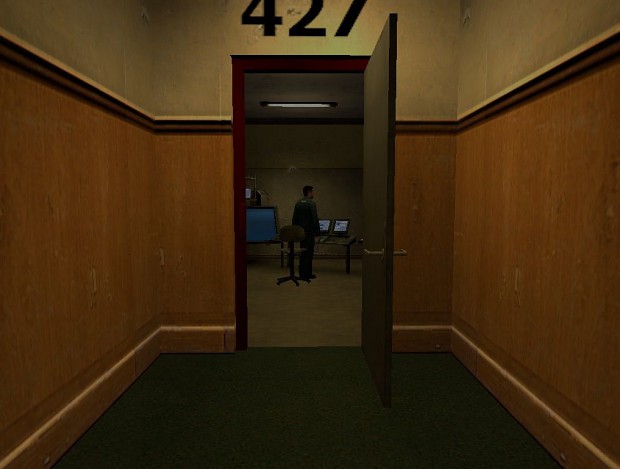 This is a story about a man named Nick.

Every week, Nick accesses the Reticule’s WordPress account and thinks about what he’s going to write. After sitting there blankly for a few hours, hoping in vain that some words will appear on the page in front of him, he generally gives up and goes to make a coffee. About five cups later, some words would generally emerge, at which point Nick will post them on the Reticule for the world to read.

But this week, something unusual happened.

This week, Nick found himself rather oddly writing in the third person. Puzzled for a moment, finally he shrugged, thinking he’d just roll with it to see what happened.

Nick had spent the night before playing The Stanley Parable, an intriguing Source mod by Davey Wreden. He’d had such an fascinating experience that he found it necessary to share it with the world, so that everyone else might have the opportunity to enjoy it just as much as he had. It involved the tale of a man called Stanley, who found that everyone he worked with had mysteriously disappeared. Or so the narrator explained.

However, the one thing both Nick and Stanley now know is that the narrator, voiced by the clipped tones of the brilliant Kevan Brighting, was not to be trusted. He’s the only enemy in the entire game, and yet your only friend. The voice in your head strolls merrily backwards and forwards through the fourth wall, riding a thin line between describing events and guiding their very outcome.

What happens in The Stanley Parable is up to you. Sort of. There are multiple paths with multiple endings, but claiming you have any kind of choice somewhat misses the point. Without wishing to spoil any of the events, Wreden describes the game as “an exploration of choice, freedom, storytelling and reality, all examined through the lens of what it means to play a video game.” Whatever path you take, you’re ultimately left with further questions and pretty much no answers to any of them.

Nick left the game feeling ultimately puzzled, yet amused by the Hitch-Hiker’s Guide style of comedy. Although the game was brief, he felt extremely satisfied by what he had experienced, and looking online, he was glad to see he was not alone.

He was even more pleased to discover just how the Narrator had responded to one letter of complaint.

Sitting back in his chair, Nick looked back over the words he had written, reading them silently under his breath. Finally, he stopped and sighed, before leaning forward and reaching for his dictionary.