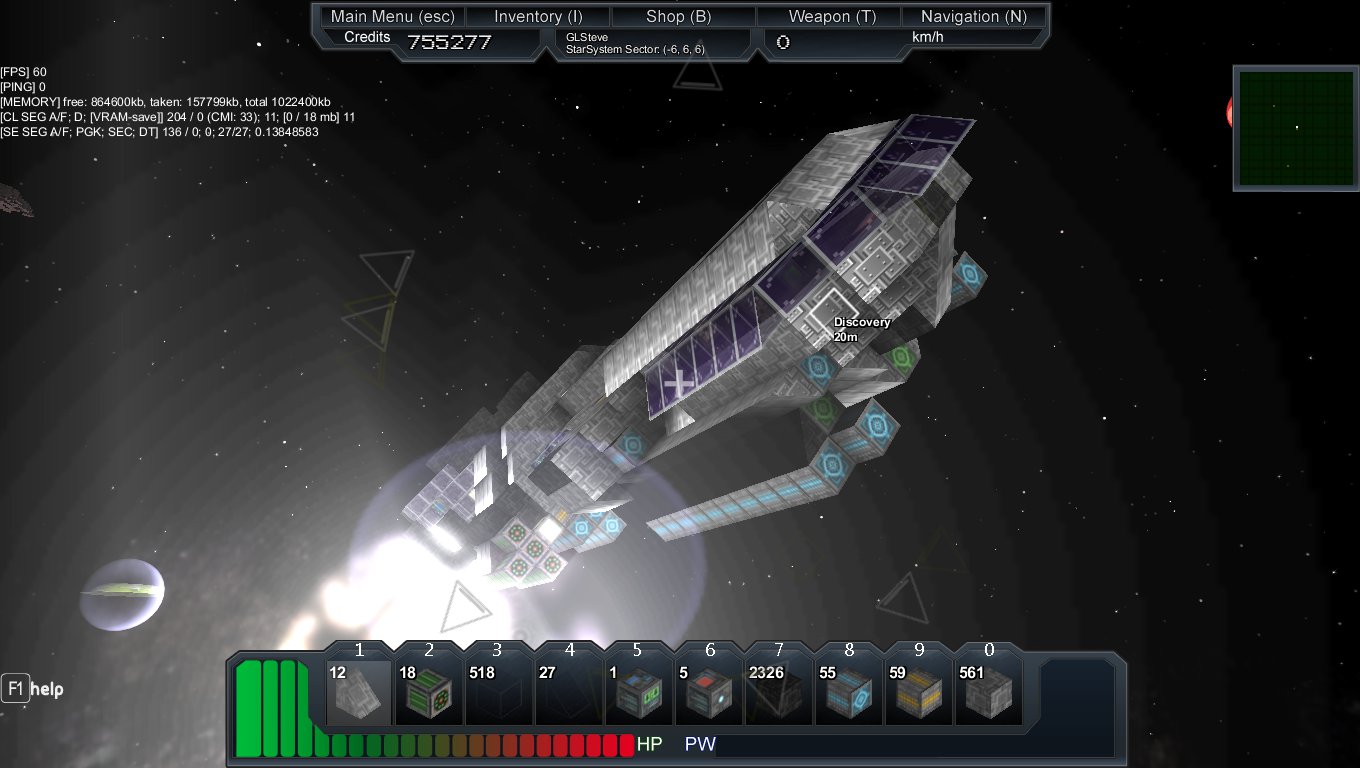 Minecraft was fun for a few hours. Eventually though, after the final blocks are placed in my wood and stone villa overlooking the sea, the sad truth of my endeavor starts to sink in – it’s all utterly pointless. At least with Lego you can at least pretend the things you build have function, but in the almost-endless forests of Notch’s masterpiece, it’s a case of build and move on.

Starmade is a little different. It lets you build fully functioning star-ships, stations and planetary complexes, fight pirates and other players, all in an infinite void. And it makes you use the word “blocks” uncomfortably often.

I am making the connection between Starmade and Minecraft early because… well, look at it. It looks like an overly ambitious mod for the latter, and often even feels like it. But where Minecraft sets you free in an essentially unchanging landscape with the tools to settle in and build pretty things, Starmade plops you in an endlessly moving universe with the bare essentials required to build a ship, then throws pirates at you.

Not immediately of course, it gently (and vaguely) tugs you through a tutorial about making your first ship and the basic controls. It’s all familiar, and soon you are swinging around the cosmos in a gunmetal-grey splat of blocks, firing lasers and feeling triumphant. Then the pirates start blowing holes in you. It may just have been bad luck on my part – they aren’t scripted or anything – but I had my first fight terribly early, and long before I had a ship even close to being able to deal with the barrage of weapon-fire the three rather large pirate ships flung my way.

There are shops floating around the sector you start in too. You can buy hull blocks, weapons, shields, and lots of other stuff from these giant structures using credits you earn from selling stuff. They also – as I discovered by accident – shield you from pirate aggression, provided you stay close by. And so, armed with a few credits, a holey ship, and a vague feeling of frustration, I set about building a ship capable of dealing with the buggers now sitting a ways away, waiting patiently for me to move from the protective aura of the shop. I was going to need missiles. And lots of them.

The weapons are clearly not finished in Starmade, which is fine given that it’s only in its Alpha state a the moment. There is only one laser – the Antimatter Cannon – and a handful of missile systems ranging from dumb-fire rockets to fully-guided harbingers of death. None, however, work they way you would expect. Take the cannon – the damage dealt is directly proportional to the number of blocks adjacent to the first one. Five touching cannon-blocks will do more damage than many blocks spread out, and there is a weird kind of science regarding block-placement, one that I have yet to figure out.

The same thing applies to missiles and even the power-blocks you place to power your ships systems. It’s all a bit esoteric to be perfectly honest, but once you get over the oddness of it, you can make some pretty amazing setups. I will admit to resorting to YouTube videos to grasp the basics, and I would suggest you do too. A few short tutorial videos, a few dozen missile blocks and a massively redesigned hull later, and I was ready to deal with the still-silent pirate ships sitting in formation around the shop. Deal with them I did, my newly installed missiles taking chunks out of them they simply couldn’t cope with. One even tried to run away…

A few hours later, I had installed a few salvager cannons on my ship, and I was slowly picking apart a local asteroid for stuff to sell. I got bored, and decided to try and reach one of the snooker-balls whizzing around in the distance that were presumably planets. Red, blue, green… I wasn’t sure you could actually reach them, perhaps they were just there for ambiance? After almost crashing into the side of what can only be described as a floating disc of rock appearing from thin air as I approached, I realised that no – they were actually places you could visit. The limitations of the Starmade engine, presumably, has forced them to be less planets and more islands floating in the void, and they pop up with a nostalgic nod to early 3D racing games too. Never-the-less, I land and jump-ship for a look around.

Now it really looks like familiar. The green world I visited could have passed for a starting area in Minecraft, with similar looking trees and even flowers of various shapes. I picked some, gathered some wood, and dug around a little. Then I got bored again and blew some large holes in the surface with my souped-up missiles. I remembered watching a tutorial video where the chap had turned an entire planet/disc into one massive space-complex, so I had a crack at that.

The crafting in Starmade is, for me, utterly pointless. In Minecraft, it was a necessary thing – you needed the tools to survive. Here, however, there are no tools to speak of, and although you can set up a block manufacturing system,  you need five thousand of the blocks you want to make just to get the blueprints. If I have five thousand blocks, I don’t need to make any more, frankly. Not that it’s likely to put off those who enjoy doing the whole factory-shebang, I just didn’t get anything out of it I couldn’t by finding a space station and salvaging the hell out of it.

Space stations! I knew I forgot something. These massive, dead structures can be found by exploring nearby sectors of space using your scanning system (the “N” key for you lazy people). They can either be moved in to by placing a faction block – blocks that allow you to claim ownership of structures and ships – or stripped for blocks. They also contain enough hull blocks to build yourself a flying beast of a ship, and the glass blocks that make up the observation deck are worth massive amounts of cash if sold at the shop. One word of warning however – there are pirate stations kicking around too, and they are armed and possibly swarming with pirate ships. I wouldn’t know as the last time I saw one on my scanner, I ran away.

If you ever sat with a mountain of Lego blocks, slowly turning them into a star-ship of your own design, you will enjoy Starmade immensely. If you ever played Minecraft and wished that you could actually build something that worked without using mods, you will find Starmade comfortably familiar, and enjoy it too. If you don’t like spaceships, Lego or Minecraft, I have nothing for you here. Go back to your pipe and slippers made from kitten fur.

Starmade is currently in a free to play alpha. You can get the client here.

2 thoughts on “The Starmade Alpha – My God, it’s full of Blocks…”