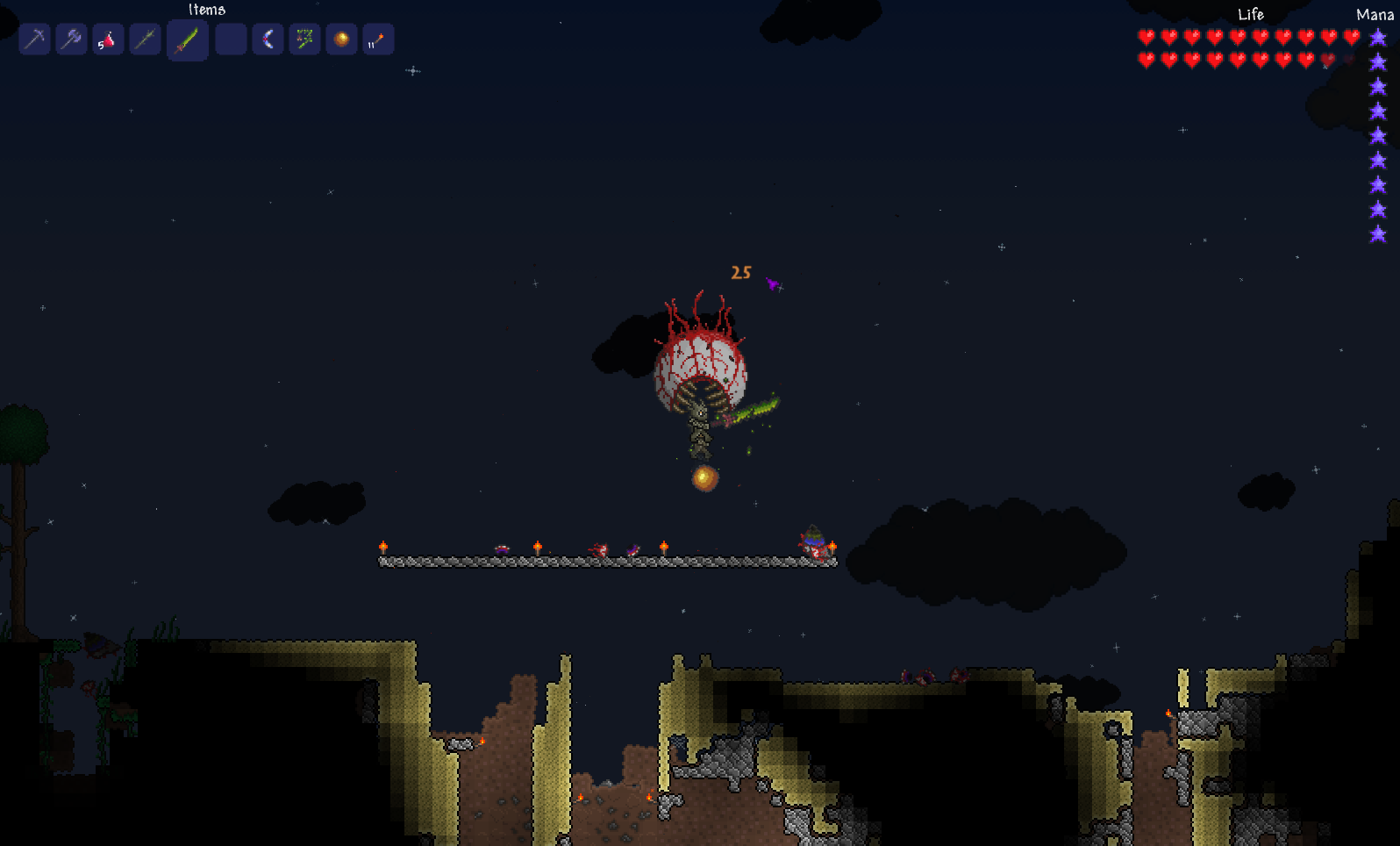 So you may have read yesterday that Chris didn’t think much of Terraria, the game that has seemingly taken Steam by storm in a relatively short amount of time. He stated his main problem with the game is that, in his words, he didn’t want to invest the time in the game to get the most out of it. By doing so, I think he’s caused himself incredible disservice. So in an effort to turn him around to the light side, I’m going to tell you the story of my own experiences with Terraria, and how this little gem found it’s way into my own heart.

Like most people, I first came across the game after Minecraft’s Notch tweeted about it about a month ago. It quickly gained prominence on Steam, and became one of the most played games on there, even at one point bypassing Counter Strike Source. It was around this time the game had elevated in my eyes from ‘something to keep an eye on’ to ‘something I had to at least try.’ A week or so later, I had the funds to purchase it, intending it to be a casual distraction or something todo between patching or playing other, larger games like LA Noire I was playing at the time. According to Steam, I’ve now played 43 hours of Terraria. That’s a lot of hours I’ve ploughed into the game. But the most telling thing is that I’m still on my first character, and in my first world and I’m still discovering new things.

I’ll admit, it didn’t click right away. The comparisons to Minecraft are hard to shake, and while I’m happy to admit it’s a good game I have nowhere near the skill level nor patience to build some of the amazing things on YouTube. And at first, I felt like I was just gathering resources mainly for the sake of building things. Then after some research on the Wiki, I realised that the comparisons to Minecraft, while justifiable, are actually pretty inaccurate. While Minecraft is about the building, Terraria is more about the exploration. Like a sort of RPG-lite building is certainly involved, but as opposed to Minecraft’s elaborate amazing constructions, Terraria is all about function over form. So what if your building doesn’t look pretty? You need to build a house so the NPC’s will come live in them, so you can buy things from the NPCs to allow you to farm more materials easier to make even better things for yourself. Terraria isn’t so much about the world as it is how you are going to tackle that world.

Digging down, you can find minerals, materials, health and everything with the aim of making your character better. Obviously the 2D perspective helps enforce this, but it means a lot more when you can see your new Gold pickaxe, or your Silver Sword. You may have to look on the official Wiki for some of the recipes, but there’s also a lot of fun in just seeing what you can make with the stuff you’ve collected in your inventory. To that end, Terraria’s world is a hostile one. Enemies from slimes, zombies and demon eyes at the top turn to bats, skeletons and worms the further you go down. Of course, the environment also gets harder to survive in, with pits of lava and Hell itself, should you get down far enough. You simply can’t survive without the correct gear, so playing the game encourages you to find more raw materials with more of them to help improve your avatar the lower you go.

Of course, going down isn’t the only challenge. There’s also equally dangerous areas randomly placed on every map. A jungle, floating islands and a dungeon all lie in wait for the more advanced adventurer, and the rewards in these are great to match the challenge of getting to them. Each require a subtly different approach both in getting to them and then traversing them once inside, but as some of the most powerful equipment in the game can be found in them, the proverbial juice is almost always worth the squeeze. The most daring can even attempt summoning the bosses, some which spawn (almost) at random and some which spawn when certain conditions are met which leads my nicely onto probably my favourite moment in Terraria that occurred to me recently: Some of the more rare equipment in Terraria can be found in Shadow Orbs. These objects are only found in The Corruption, an area of the world which as the name suggests, has been corrupted by an evil taint. In this area, the monsters are deadlier, more frequent and thorns litter the ground, ready to sap health from any adventurer who fails to clear the path before adventuring there. So making my way carefully to the area, I found myself two Shadow Orbs fairly close to each other, and began applying my hammer to the Orbs. Every time one is broken, an ominous message appears at the bottom of the screen to warn you from doing so – because after three a giant worm called the Eater of Worlds spawns. This boss is probably one of the most difficult in the game, because he not only burrows through the ground to attack you (meaning you can’t see him, you have to listen for the tell-tale sounds) but he’s also made up of segments. If you kill one of the middle segments before the head, that segment becomes another Eater of Worlds which attacks at the same time, and so a fight against one EoW can quickly become a fight against MANY Eaters of Worlds. And just to add insult – he’d been buffed in the most recent patch, so I’d never fought him since the update.

Still, I knew he would come as soon as I smashed that second orb, so to prepare for the fight, I found a good long patch of flat ground (albeit still within The Corruption), lit it up with many torches, got my potions ready and then took my hammer to the last Shadow Orb. Which was at the bottom of a chasm in the middle of the Corruption. The boss music started, I used my grappling hook to get myself to the top of the chasm and got to my makeshift battleground, with my sword at the ready to fight. The Eater burst out of the ground bearing it’s teeth, and the I started swinging my sword wildly. About two minutes into the battle jumping and swinging, and unfortunately had split him into two. Still, I could do this. Then the words I definitely did not want to see appeared on screen:

The Blood Moon is Rising!

The blood moon is a random event that has about a one in twenty chance of happening every night. It basically increases the spawn of all monsters by a massive amount, sending many many zombies and demon eyes in my general direction. And as I said, I was also in The Corruption, so the extra enemies that spawn there ALSO increased their spawn time. I became a mad panic and flurry of clicking as I desperately tried to fend off wave after wave of enemies, while at the same time still fighting two Eaters of Worlds. Swing, jump, swing, jump. Trying to remember to avoid the attacks from the multitude of zombies and demon eyes, switching to my Orb of Light so I could see what I was doing, trying desperately to remember to heal before my life got too low. I don’t think I’d ever experience such panic in a long time. Due to the mass of activity on screen, I wasn’t able to “manage” my attacks on the Eater of Worlds properly, and I ended up cutting him into eventually five pieces at one point, so I had FIVE Eaters to deal with at the same time. Jump, swing, jump, swing – if it hadn’t been for the Cloud in a Bottle and Balloon allowing me to double jump, I don’t think I would have made it. The sense of relief when morning broke was palpable, my fingers were shaking from the clicking, and I swear I was almost out of breath. In that moment, I don’t think I had ever felt so bad-ass in an indie game as I did after surviving that onslaught. There I was, victorious with thousands of pieces of dead zombie, demon eye and giant worms strewn across the landscape. Somehow, I had survived.

That’s not even going into all the other things I love about this game – not least the fact the characters and worlds are saved separately, so a singleplayer world can be tackled in multiplayer, or you can bring your hero and all their equipment to as many worlds as you like. Yes, Terraria might take a while to get going, but once it does – there’s so much to explore, do and discover. Terraria isn’t a 2D Minecraft – it’s an adventure all of it’s very own.

2 thoughts on “Terrariavision (Or Why Chris is Wrong About Terraria)”