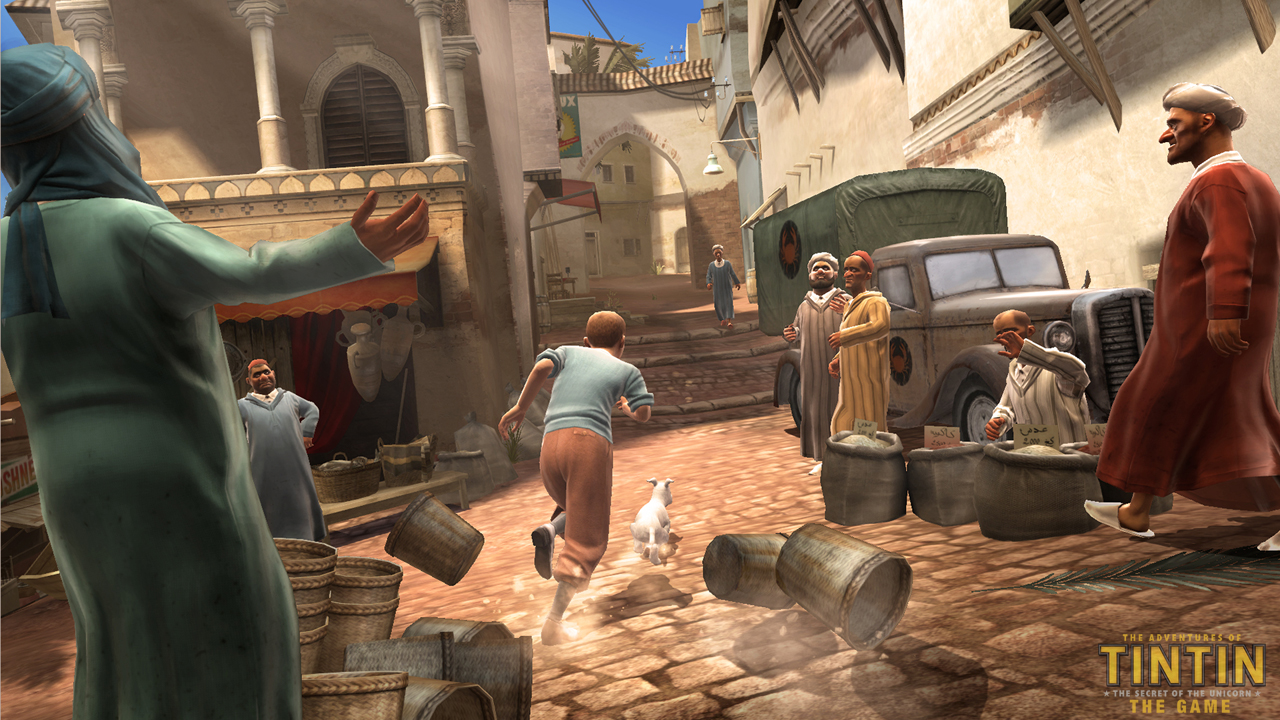 Licenced games have a horrible tendency to be absolute tosh barely worth your hard earned cash, but every once in a while a game like Tintin appears which proves itself to be well worth splashing the cash on.

Let me clarify that a bit, it is certainly worth taking a look at, just don’t expect to find a world beater here, just a surprisingly enjoyable platform/adventure/racer/flyer game. Tintin is based on the film of the same name, and I can only assume it follows the story of the film fairly accurately, I haven’t seen the film yet, but based on the trailers the game does a good job of covering the main points.

The story mode in Tintin takes you through the events of the film for the most part through the perspective of the ever loveable rogue, Tintin along with the smartest dog in the world, Snowy. You also get some time to play around with Captain Haddock’s ancestor with some swash buckling, pirate stabbing escapades.

But for the most part you take charge of Tintin on an adventure to find the treasure of the Unicorn, the ship that Haddock’s ancestor scuttled. The hunt starts off innocuously, Snowy finds something interesting at a stall in a small European town and follows Tintin’s footprints in order to drag the young journalist to the market seller. Here Tintin purchases a model of the Unicorn much to the annoyance of a shadowy figure who seems intent on stealing the model from our affable do-gooder.

Soon Tintin arrives at a great mansion and infiltrates it to regain the model of the Unicorn which is stolen from him. This is where the game comes to life with a whole heap of side scrolling platforming to get through the house. Tintin climbs ladders, drops through trap doors, beats up butlers and throws various objects at the noggins of various henchmen. Things start to come unstuck a bit when you aren’t performing this merry jig. There are scenes where you control Haddock’s ancestor for some sword fighting, pilot a bi-plane through rocky caverns and drive a motorbike with sidecar through the desert.

These moments are enjoyable enough as the separate mini-games that they are also available to play as, but when they are thrown into the main game they take away from the fluidity of the core game mechanic. As I was playing on the 360 with my Kinect plugged in, I was given the choice of using the motion sensor with the sword fighting. It wasn’t up to much in all honesty, using the pad is by far the best option.

Nevertheless, Tintin’s main adventure is pleasing enough to play through, and while it does get repetitive at times, it is certainly a darn sight better than most movie tie-ins, and the game is very pretty with the same feel as the film. It is by no means a graphical powerhouse, but it is easy on the eyes.

There is one final game mode that can be explored, a series of levels which take place within the dazed and confused mind of Haddock after he gets knocked unconscious. Co-op is available in this mode which allows you to switch between Haddock and Tintin as you like, however I haven’t been able to test the co-op aspect of this mode. The core gameplay in this mode is the same as the main adventure, but it takes place in a much more surreal atmosphere with varying images playing out in the background to the level and the voice of Tintin trying to wake Haddock up. There are a variety of collectible objects in these levels which you earn you coins to spend on different character modifiers and to open up new rooms. It is a thoroughly enjoyable alternative take on the main game.

Tintin then has everything you could want, a singleplayer mode, co-op and mini-games with a core gameplay mechanic which sets it well above general movie tie-ins. It is an enjoyable, if a bit repetitive title that is worth picking up if you have the chance.

For more details on our scoring system, please read this page.