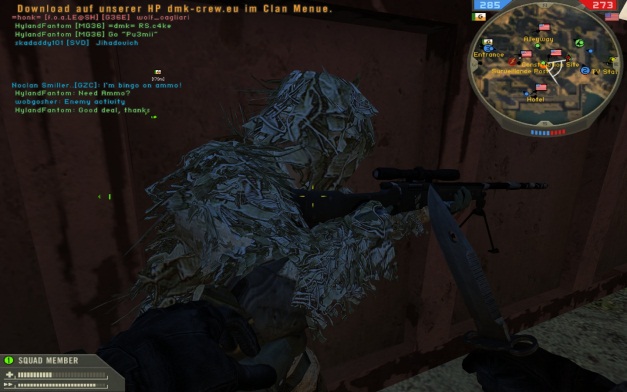 I love Battlefield 2, I have put over 500 hours into my clan profile which is roughly 20 days of playtime. It is shocking how much time I have put into this game, but I think it gives me the authority to provide you with a rundown of the top five weapons in the game. I honestly believe C4 is one of the best weapons in the game, it is useful both as a defensive and offensive weapon. More importantly, it is explosive! Unique to the Special-Ops class it requires great skill to use effectively. It is best used for taking out armour or commander assets, but you must be brave to succeed when you use it. While an Anti-Tank chap can duck in and out of cover firing off his rocket, to use the C4 you need to get close and personal with your target. Blowing yourself up along with your target is a common occurrence as you will struggle to get away undetected in a busy map. The pistol comes in extremely handy when you realise you have emptied your magazine in your primary weapon and need to quickly finish someone off. Extremely useful due to the appalling hit-detection you will find in the game which means the majority of your assault rifle shots will miss. Another advantage comes with the kits carrying a silenced pistol, when sneaking in an enemy base you don’t want to create unnecessary attention so a quiet kill is essential. If you get killed by a pair of shock paddles you really should hang your head in shame. Probably one of the most embarrassing weapons to be killed by, if you are the killer you will be telling the story to your mates for months to come. They are more commonly used to revive fallen comrades, but they are deadly on an enemy. You must be thinking about using them offensively to kill with them regularly, most players will use a knife instead. Talking of the knife, no list would be complete without one. Weapon of choice for killing an unsuspecting Sniper, but difficult to use smoothly during standing combat. Why? That awful hit detection. The best time for using the knife is in pre-arranged knife duels. Get on a LAN server or password protected server with some friends, find a suitable location and start your knife fight to crown the ‘King of the Knives’. I’ll put my hands up and admit that the mounted machine gun and TOW may not naturally come under your classification of a weapon, but they are some of the most useful tools available in the game. The mounted machine gun has better accuracy than the heavy machine gun carried by the Support and can easily mow down foot soldiers and deal great damage to lightly armoured vehicles. The TOW is the ultimate anti-armour weapon, one well aimed shot can take down an APC and even a tank. Both are wildly underused, but they do pose a risk of being knifed if someone sneaks behind you.

Those are my top five weapons, what would you choose? I bet you will all say the sniper rifles are the best won’t you? Egoists.