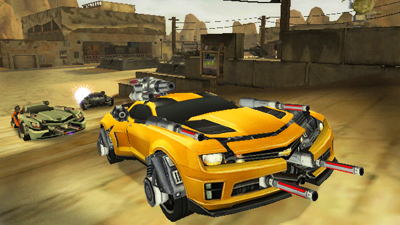 There’s a common theory stating that insanity is defined by the act of attempting the same thing over and over, all while expecting different results. Now, I’m no expert in psychology, but I’m willing to accept this as an accurate definition. But having said that, I have another theory to throw your way; hear me out and see what you make of it. My definition of insanity is as follows: the act of making a Transformers game in which the player is unable to transform from a vehicle into a giant humanoid robot. It sounds utterly mental, doesn’t it? Absurd, even. Like you couldn’t make this stuff up. Unfortunately, someone at either Activision or Behaviour Interactive is in dire need of some serious psychiatric help, because he or she was demented enough in the head to green light such a game.

Transformers: Dark of the Moon Stealth Force Edition for the 3DS is a tie-in to the third Transformers film and features the titular stealth force mode that’s present in the Xbox 360 and PlayStation 3 versions of the game. Stealth force mode supposedly allows players to combine the manoeuvrability of being in vehicle form with the firepower of being a twenty foot tall robot. However, while stealth force presented players with that merging of agility and kablammo – that’s a real word, by the way; look it up – as a back-up option on home consoles, in the 3DS iteration it’s forced upon players as their only option in terms of defending themselves. So, you’re either a vehicle or in stealth force mode. You won’t be stomping around as a heavily armed bipedal wrecking machine while kicking arse and taking names. In fact, the closest you’ll get to this on the 3DS is when one of the game’s sparsely animated cut-scenes teases you with images of said bipedal wrecking machines stomping around while kicking arse and taking names. What possessed the developers to leave out the thing that makes Transformers so undeniably awesome is so far beyond me it’s not even remotely funny; it’s cruel, in the same way as hiding somebody’s bank details and giving them a winning Lotto ticket would be cruel. Of course, such a heinous decision might theoretically have been at least partially forgivable if Stealth Force Edition was in any way fun to play, but the hideously misjudged control schemes for each of your two overly similar forms are more than up to the task of preventing that from being the case. Driving games have been using dedicated buttons for accelerating and reversing for, oooh, some time now and I think it’s safe to assume that nobody would call shenanigans if I were to say that it’s proved to be a fairly successful way of doing things. But Stealth Force Edition dares to be different and as such while driving around as a vehicle, both your steering and acceleration are controlled via the 3DS’ analogue nub, which is every bit as irritating and unwieldy as it sounds. Furthermore, when in stealth force mode, the game inexplicably puts your steering on the shoulder buttons and gives strafing duties to the analogue nub instead, which is more than slightly jarring; I found switching from vehicle mode to stealth force and inadvertently ploughing sideways on into a wall all too common an occurrence.

Stealth Force Edition continues its streak of inadequacy by being too samey throughout its eighteen missions. There’s very little variety to preceedings; you drive around open areas either shooting everything in sight or trying to reach a set number of checkpoints without being blown to pieces and it’s not interesting or exciting in the slightest. Not to worry though, because should you be either Transformers mad or masochistic enough to endure the crushing monotony, the sheer disbelief at not being able to properly transform and the controls that have all the fluidity and grace of a limbless ice-skating rhinoceros, Stealth Force Edition can feasibly be played through and polished off in approximately two hours, by which point you’ll be too disheartened to care about its complete lack of multiplayer. That’s two hours worth of entertainment – a term which I use very loosely – for an asking price of £30, which makes buying this game make about as much sense as taking said thirty pounds and putting it in a shredder. Its passable production values – vaguely impressive visuals and the obligatory authentic voice talent – can’t disguise the fact that Stealth Force Edition was a complete misfire in almost every area. Whether you’re a Transformers fan or not, I can’t think of a single reason to recommend that you play this travesty.