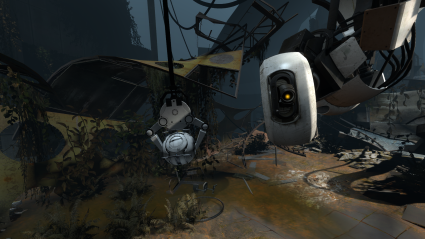 I am going to say it, I think Valve are falling in love with co-op a bit too much, along with many other developers, but I am going to highlight Valve right off based on what Geoff Keighley wrote in his The Final Hours of Portal 2 epic.

According to RPS Geoff wrote “Portal 2 will probably be Valve’s last game with an isolated single-player experience” which, if true, could mean a variety of things. The first potential meaning that comes to mind is that Valve are just going to make multiplayer games like Team Fortress 2 from now on. This is clearly a ludicrous suggestion as that would mean the Half-Life series either ending with Episode 2 or turning into some strange multiplayer shooter full of hats.

The more likely meaning is that any future Valve titles will include co-op as a minimum, and more likely they will have the main game be a drop in/out feature. That just doesn’t sit well with me, I don’t mind games like the Lego series as they are all about having fun and work especially well on a console with two controls, or even on a PC with two control set ups. However, a series like Half-Life is a story driven first-person shooter which has been solely single-player (with the exception of console only expansion Decay) since the original was released.

Now I doubt that any possible future Half-Life title will force you to play with someone else in the main story, so the drop in/out won’t be quite as awful as it could be. My real problem lies with Portal 2 where a whole chunk of story exposition comes from the co-op mode, for some people co-op just isn’t practical or attractive. Personally I find my gaming time lies on a different slant to my friends’ and that if I wanted to co-op they wouldn’t be available. For a game like Portal 2 I would hate to experience co-op with a complete stranger with little understanding of how the other person plays.

A co-op mode in Portal 2 would have been fine by me, as long as it didn’t include a whole heap of story. My rambling, semi-ranting point is that I don’t like games which force co-op upon you to get the full back story, drop in/out is bearable as long as it doesn’t become too obvious that you are missing a second human player, but at the end of the day, the main story mode of a game should be single-player and nothing more.