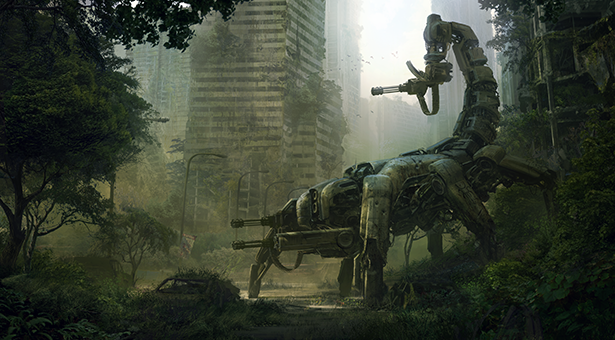 A post nuclear apocalyptic wasteland. Sound familiar? It’s a theme that has been quite literally nuked to death, left to fester, and then played on. Fortunately though, Wasteland 2 is the successor to one of THE original post apocalyptic games.

Hit the break to find out my early impressions of the Early Access build.

So, I’ve been given early access to a release-ready version of Wasteland 2. In the interest of transparency, I never played the first game. In fact, before the recent XCOM re-make I never really liked turn-based combat. Further, Syndicate aside, I never even liked top-down isometric games.

This’ll end well I thought after Chris passed me my assignment to check it out.

It starts in quite a somber way, at the funeral of a Ranger. Rangers are a sort of post apocalyptic cop. Think a U.S. Marshal in a western, and you won’t be far off…save for the pink-spiked hair, the gas masks and the giant cockroaches. It sets the tone beautifully and then pretty much leaves you to get to it. You’re given a mission, but you’ve always got the feeling that you can pretty do as you please. Impressive to achieve in the first few minutes.

The graphics aren’t great. They’re not bad either understand, they’re just functional. It fits in with the overall aesthetic and to be perfectly honest, after the first “urg” thought, I didn’t think about them after that. The game is set up well and you’re far more interested in what’s going on IN the screen, rather than AT it. If that makes any sort of sense.

Your constant companion throughout the game, apart from your actual companions, is the radio and it’s brilliant for world building. You’ll hear occasional radio chatter, you’ll get missions from it and can even level up your team via it. I love it. It just works.

The combat too, seems to work well. It’s explained in a good way (in fact all the ‘tutorials and tips’ are really well written) and you’re pretty much straight into it when you arrive at one of your first two missions. I particularly like the way I discovered that friendly fire was on; by killing one of my own group by shooting them in the back of the head while aiming for an enemy. Line of sight guys, line of sight…

You of course, have the usual RPG staples. Character progression (and you have four, either chosen from a set or custom made), limited inventory space (and weight limits), branching stories, side quests, loot, etc etc are all there. They’re not revolutionary in any way, nor do they particularly try to be, but they work well and are easy to use.

The enemies are varied, tough as nails (oh god I died lots) and you discover really quickly that positioning is vital. Cover probably helps too. Did I mention that I died lots?

Happily the missions seem nice and organic. So far at least they seem to stem nicely from the world and its fiction and as you encounter new settlements and areas, the missions just cascade. You’re free to take what missions you chose and they seem reasonably varied (given the usual gaming constraints). There are also a number of non-combat options in the highly varied dialogue so that you don’t feel like you’re gaming the system at any point.

It all comes together as something quite compelling. As someone who doesn’t typically play these types of games this has quite gripped me. I think the moment I realised I like Wasteland 2 was when I was trying to figure out how to get more time to play it (perils of being a parent).

Wasteland 2 is set for release 19th September and I have to say, if I liked it, fans of this genre are going to love it. Definitely worth a look folks.

Look out for my full Verdict shortly after release.