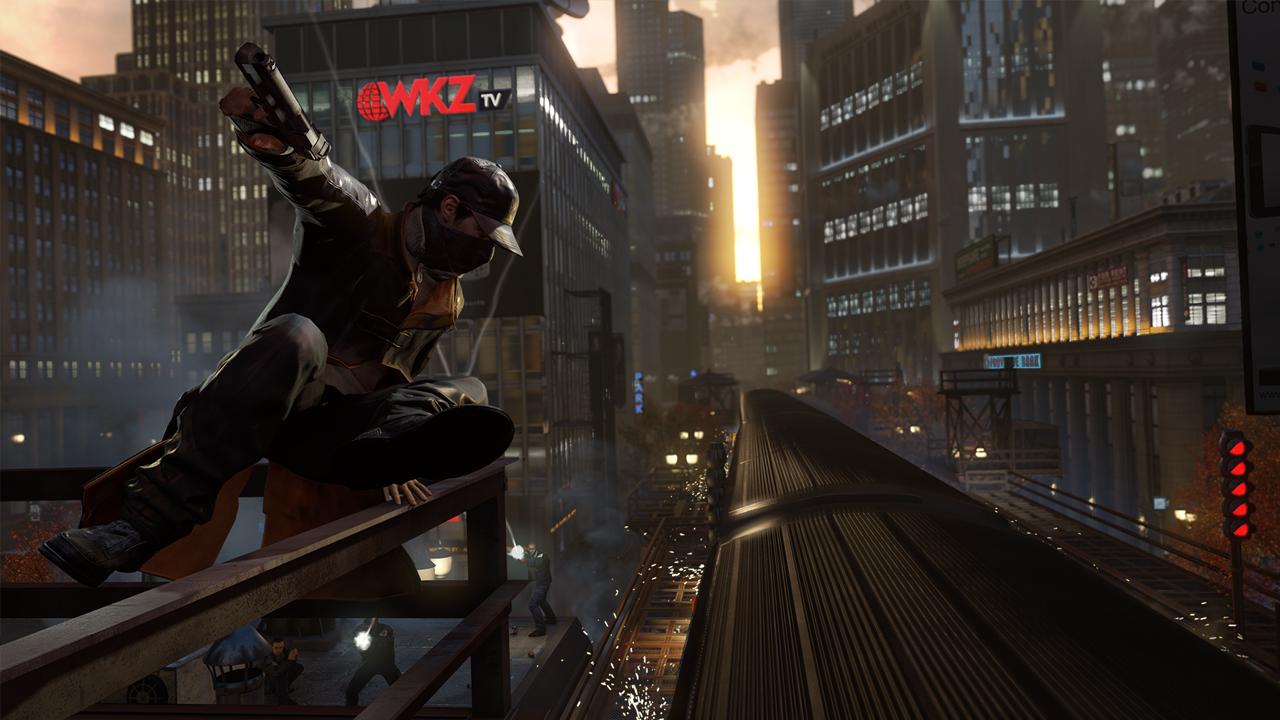 The game known as Watch Dogs but which really is called Watch underscore Dogs came out last week. Jon is working on a Verdict for the coming few weeks, but right now we are ready to deliver some of our early thoughts on the game across both PC and PlayStation 4. Read on…

As is now traditional (particularly with a Ubisoft game) there were numerous and extended issues with Uplay and servers preventing many people from even connecting to Uplay to download the game.

In the time it took me to download Watch_Dogs (nearly 4 hours over a 40mb connection) I managed to download 2 games on steam and update 3 more. I also watched 14 videos containing cats. One also had a wood chipper.

This is inexcusable. The always-on requirement for games is getting in the way of people accessing the titles they’ve paid for. If it weren’t for the game being given to me for review, i’d probably have stayed away from the whole thing until the situation had stabilised. Buying a release-day game nowadays is a very risky prospect….

…that said, I’ve been quite impressed with Watch_Dogs so far. It looks good on my rig (everything on high or ultra), and runs like a dream. I’ve certainly not encountered any stability or frame-rate issues.

I’m particularly enjoying the world it’s created. I love the way it makes you feel about random pedestrians; this is the first open-world game where I’ve not immediately started running over people on the pavements…. that’s normal… right? right?

I was initially highly skeptical of this game, but although only 4 hours in i have to say i’m really quite enjoying myself so far. Now, granted, this could all change, but so far- it’s a good start.

Watch_Dogs is an okay game. It has all the hallmarks of the traditional open-world city – places to go, people to shoot, cars to be abused etc. And it kind of works, within a context. The context is that you are a very angry man with the ability to hack and break just about every piece of technology with a wi-fi connection. This includes grenades, inexplicably. And as you are very angry, you guide this rage into toppling bad guys and spying on random passers-by as you move through the city of… Chicago. I almost said Detroit there. Doesn’t matter, really.

You carry around the reincarnated spirit of Steve Jobs in the shape of a mobile phone. He is mightily clever and can hack cameras, cars, and even peer into the deepest darkest secrets of everyone you meet – just like an iPhone with Facebook on it, really. But as it’s Steve Jobs in there, you don’t actually do anything yourself – you just point and hit a button, and he does the rest. Sometimes it works. More often you blow something up by accident, or you cause a multi-car pile up directly in front of you, then bad guys blow your face off from multiple angles as you end up wedged between crashed cars. Or even worse, you’ll spend fifteen minutes trying to outrun the cops after a mission, only to get popped by Steve’s lack of timing when raising some bollards. Being fired into the side of a building at high speed, and forced to start the whole damn thing again is pad-snappingly frustrating.

This is where Watch_Dogs bugs me the most – despite there being loads to do, it all falls down a flight of stairs when you realise just how little of it is actually fun, and more frustration than anything else. Standing on a street corner is great for a while, holding your phone and being Bruce Willis in Unbreakable – feeling all those little lives around you as they brush past your fingers. You see someone with a hackable bank account, but wait… they were just diagnosed with lymphoma. You shall pass unscathed, sickly one. After three hours of this, you stop caring and let Steve ransack their savings. It makes no difference in the long run, and it slowly becomes clear that it’s just one big random generator, spewing names and back-stories and hackable tid-bits. It’s also one of the few times that using your hacking skills won’t get you killed.

But, of course I’m only a few hours in, it may yet get better. Neither me nor Steve would bet on it though. The Ubi-fuzz is strong with this one, sadly.

I’ll hold by hands up to the fact that I have barely scratched the surface of the game, I’ve played about an hour and a half so far and I am decidedly puzzled.

Are you a ruthless man willing to threaten a man with a gun after (apparently) killing some gang members in the bowels of the Chicago baseball stadium? Or are you a kind hearted vigilante out to do good by stopping crime?

I don’t know, it just goes to show how weak the opening sequences are to this game. In something like Grand Theft Auto (which this will undoubtedly be compared to) you know from the off that you are a criminal willing to get his hands dirty….and maybe in the progress run over some civilians. In Watch_Dogs I accidentally killed some people when testing out hacking a couple of devices in the parking lot of your motel and seemed to lose reputation (or something similar). Later, while chasing a random perp I caused him to crash into a fire engine. Great fun I thought, I was saving the cops a job…that was until an innocent bystander called them to try and take me down.

It all seems very split-minded at the moment, and I’m not sure what I will make of things once any of the online aspects kick in. I certainly need more time with it to figure things out.

One last thing, this game is showing me that I might finally have to upgrade my PC. My processor is a few generations old and my graphics card (460GTX) is decidedly long in the tooth. An upgrade (or PlayStation 4) wouldn’t go amiss. However, at times the visuals look quite cartoonish. The combination of lighting and shadows look plain weird at my settings, I might turn things up to max to see what it is meant to look like. As it stands, I would much prefer something which looks more like GTA V than this. Time will be the true test.