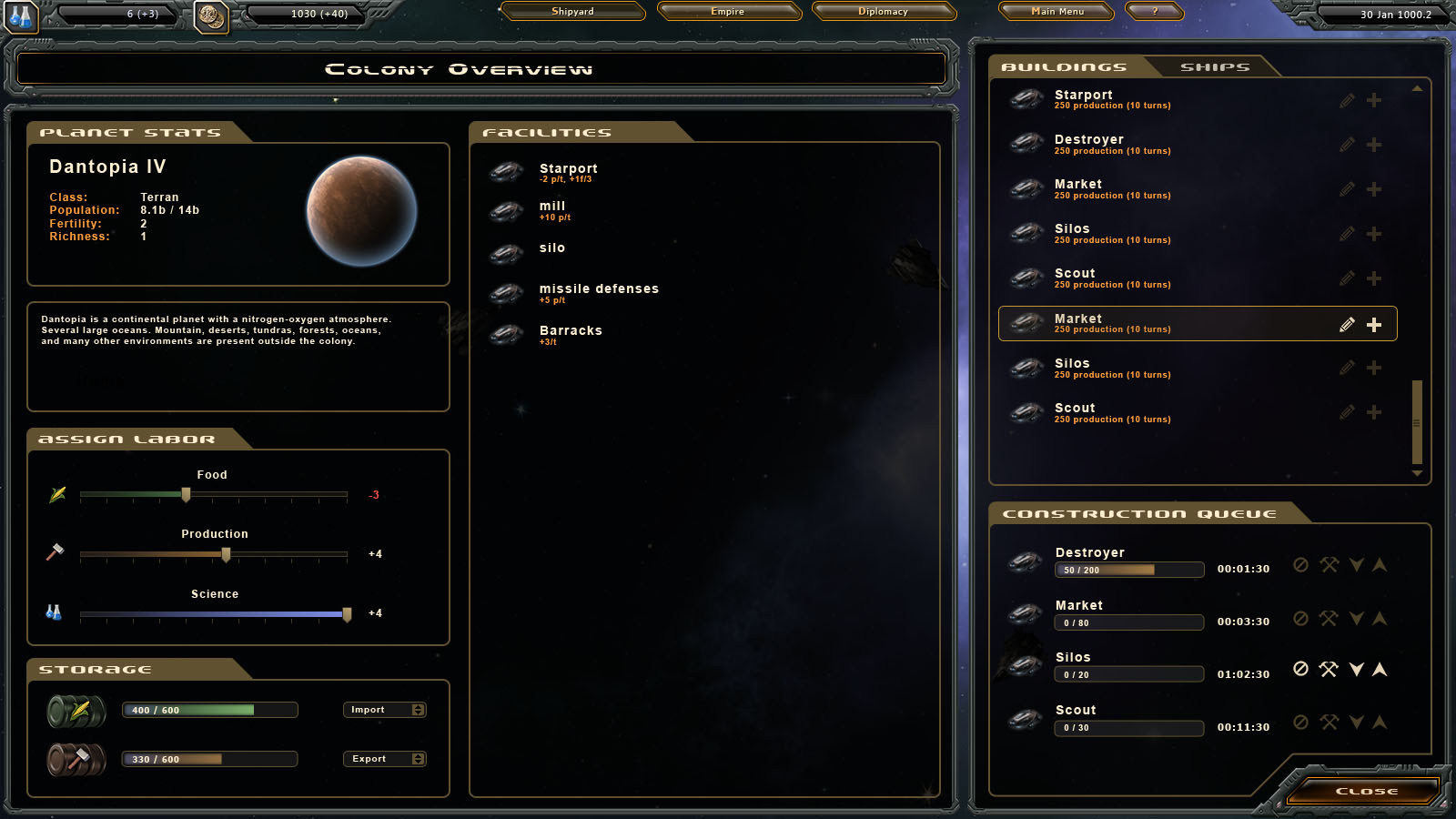 It’s been a long time since I’ve played a 4X game that’s actually fun. Then I played StarDrive.

StarDrive is a 4X Action/Strategy hybrid from Zer0sum Games, inspired by the likes of Masters of Orion 2 and Escape Velocity. Those are quite the games to be inspired by, I’m sure you’ll agree. Can StarDrive deliver on those inspirations? That remains to be seen: the build I’ve been playing is an early-alpha, before even the Kickstarter funders get access to the in-dev alpha in January. From what I’ve seen and played so far, however, it is definitely on the right track to becoming something very special indeed. The game is played on a 2D galaxy map, the size of which you can set before you begin the game. It is played as a realtime strategy/management game, where you can build new facilities on your owned planets, set their production parameters (which affects the rate at which you gather or lose resources – a balancing act you may be familiar with if you’ve played a few 4X games), and build new ships.

A key feature of the game is ship design. You design your ships from the ground-up, first choosing a hull, which will affect how much stuff you can put on your ship. Bigger is better, as the nun said to the soldier. However, you only start with two hulls: a tiny one and a slightly less tiny one. Larger hulls need to be unlocked via research. Next comes the fun part: equipping your ship. This is done via modules, which attach to your ship according to a grid. Like this:

The only real limit of what you can stick on your ship is the number of slots you have available. However, cannons need ammunition on board to fire. The ship needs engines to move, and fuel to power both them and the weapons. You need a cockpit. However, if you want to build a super-heavy gunship comprising of nothing but cannons and the bits that make it work, you can. You are free to make the kind of ship you want.

You can control your ships with RTS-style mouse commands. The exception of this is your racial flagship, which you control directly. It controls much as you would expect a twin-stick shooter to: WASD moves, the mouse aims and shoots. Combat itself is very fun and strategic. The ships of other races are designed in exactly the same way as yours (indeed, the enemy can sometimes steal your ship designs), meaning that turrets can be shot off, armour can be pierced, ordnance can be ignited, and engines can be destroyed. It isn’t just a simple aim and shoot: you need to think during combat and fire at weak spots.

The things we’ve come to expect of 4X games are already implemented, such as other races inhabiting the galaxy, customisation of your own race (which, incidentally, is already brilliant. Do you want to play as a race of lazy cyborgs who haven’t yet discovered warp-drive technology? You can), and planetary colonisation. Other features, such as diplomacy, has not yet been implemented, but will be in the future. I like it so far, despite how unstable the build I have is. This game has such an amazing amount of promise, despite how incomplete it currently is. It’s already fun. I will be revisiting StarDrive at a later date to tell you how it has developed from the stage it’s at now.