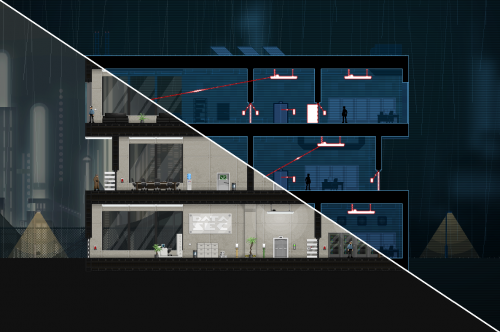 The sound of a man being punched in the face is a slightly wet smack, like a used flannel dropping to the floor.

The premise of Tom Francis’ Gunpoint is that you’re a spy equipped with a device called a ‘Crosslink’, which allows you to interfere with the wiring of the buildings you infiltrate. Are all the entry doors locked with the only switches to open them inside, where you can’t get to? Disconnect the exterior CCTV camera from the alarm system and wire it to a door. Now, going into range of the CCTV camera will open the door instead of triggering an alarm, thus allowing you entry. It’s all rather clever. The Crosslink is really the meat and potatoes of Gunpoint. It makes it almost like a puzzle game – it even would be, were it not for the inclusion of guards and multiple routes around problems.

You have two main methods of hurting people. The first is the Bullfrog, which you start the game with. It allows you to charge up jumps which are far beyond a normal human’s ability. You can use it to access rooftops or fling yourself at people. You can also, entertainingly, use it to throw yourself through windows or knock guards through windows, akin to something you’d see in an action movie. You can also gain access to a pistol, which allows you to hold guards at gunpoint (do you see?). Holding a guard at gunpoint will stop him moving and stop him from firing at you, which is crucial as one shot can kill you. One shot is also enough to kill any guard, but firing your weapon causes a 20 second countdown for you to finish the mission. If you take two long, a police sniper spawns to guard the exit. They’re almost impossible to get by, so you’d better not shoot anyone.

Guards come in three flavours, all of which must be dealt with differently. The first flavour is the standard cop, who can either be jumped on and knocked out with a swift punch to the face (you can even smack him multiple times, for which the game will call you out on), or he can be held at gunpoint. The second flavour is the enforcer. He can’t be jumped on (but can still be knocked through a window if you get him from behind), but he can still be held at gunpoint. The final flavour is the professional. He will shoot on sight even if you try to hold him at gunpoint and won’t leave his post to investigate noises. However, like the other guards, he will go to the nearest lightswitch if you turn out the lights on his floor. They, fortunately, can be jumped on, but the only safe way is from behind, meaning they need to be distracted. You’re a freelance spy, and thus you have access to different missions for different clients, each with their own overarching storyline. One involves you working for the police, and another apparently has you help someone investigate a murder. Some missions have bonus objectives, such as not harming anyone or putting the doors and lights back how they were before you leave. For now, however, the main objective is always finding and erasing information from a computer, or computers. It also seems that your choices during the dialogue sections and during missions will affect how your clients treat you, and may even affect the overall story and what missions you get offered.

Completing missions also gets you money and one upgrade point per mission for which you can upgrade your gadgets. Decreasing the time it takes your Bullfrog to charge, for example. New gadgets can be bought between missions, ranging from your Crosslink and pistol to gizmos you place on switches to electrocute the next guard to use it.

Other than the obvious issues with it not being finished, I’ve no real complaints. I like it. I like it a hell of a lot. Gunpoint will be released at some point after May this year with an as-yet undecided price, so there’s no way to pre-order yet. However, Tom frequently asks for people to test new builds, so keep an eye on his website and the game’s Twitter.

I think we’ve got something special here, and I can’t wait to see it when it’s finished.