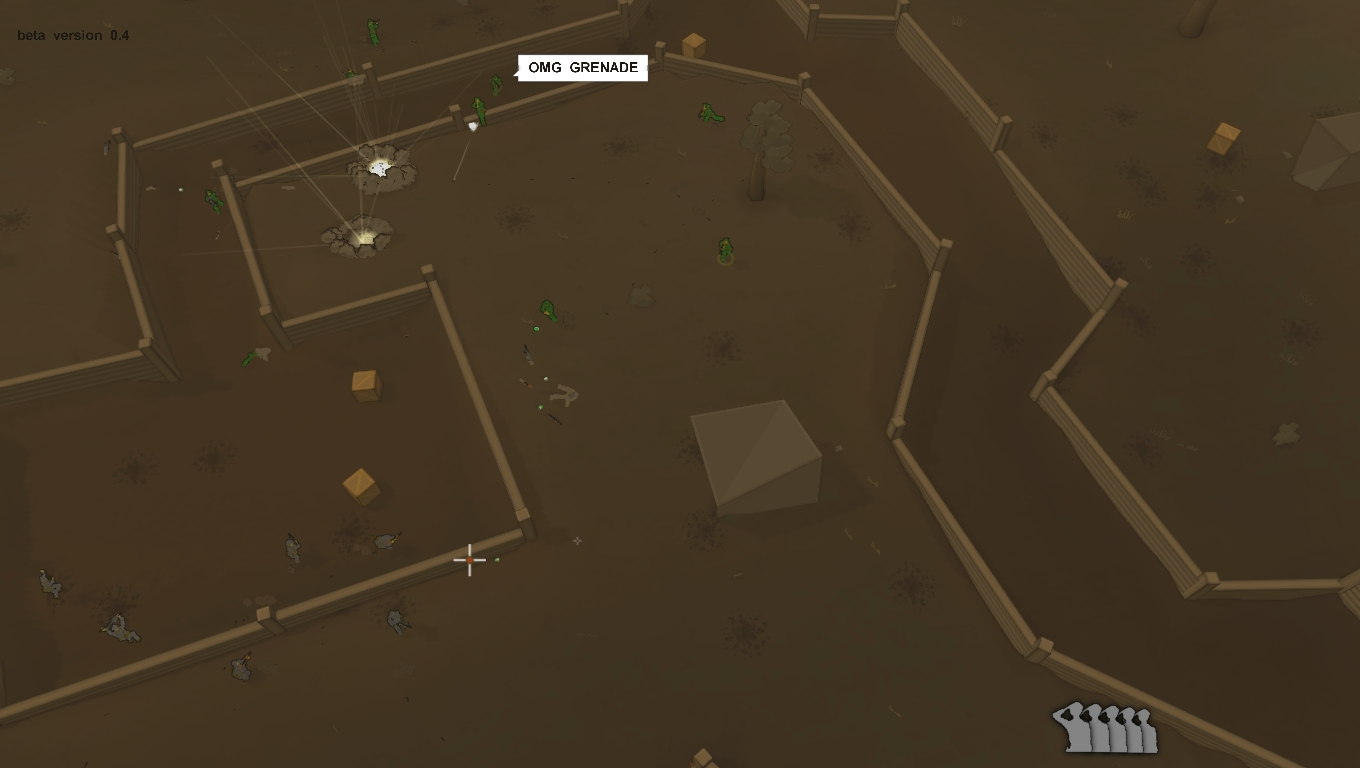 Do you like shooting men? Then do I have the game for you.

Running With Rifles is a top-down shooter by Modulaatio Games. Then premise is a simple one: warfare, and lots of it. This is the kind of game I’ve wanted for the longest: a game of endless warfare where you muck in with the other soldiers. You are not special, to begin with. You don’t even start as an officer, if you don’t want to. You are just one of the rank-and-file, and you will die. A lot. Stepping back, you begin the game  selecting which army you wish to fight with (grey or green). You then select the initial number of occupied bases, which will affect where the battle initially focuses, your initial rank, which will increase and decrease depending on how well you do, the accuracy of the AI, and then the maximum number of soldiers, from 0 to 600. There are also two large maps to choose from. As you can see, there’s already a fair bit of customisation in place.

So how does the game hold up? It’s good, actually. Really good. At the beginning of the game, you spawn in one of your bases with whatever rank you set for yourself and a weapon chosen at random. Maybe a few grenades, if you’re lucky. Tab brings up a map where your objective is always highlighted, which often involved going to an area of the map and capturing it. By killing every hostile in the area. You are never alone: your allies will have the same objectives and you can (and should) join up with their squads. When you do well, by killing things and completing objectives, you accumulate points. Get enough, and you’re promoted, which is a similar way to how the real military does things. Being promoted allows you to recruit allies into your squad (this is done automatically). At the maximum rank of Captain, you can recruit 7 others. Being killed and ‘accidentally’ killing your own troops makes you lose points, and you can very easily be demoted. You’ll be glad of allies when you get into a firefight. Combat is quick and brutal. There is an automatic cover system in place, which you need to make full use of if you are to survive more than a few seconds. Two or three bullets can easily kill you, and firefights are usually drawn out by reinforcements from both sides as people die all around you. It genuinely feels as if you are caught in the middle of an all-out war. The urban combat in the second map (which is not in the demo) is really where the combat shines. Forced into close-quarters, entire squads flanking around buildings, machine gunners and snipers setting up on rooftops. It is intense and it is incredible fun. The AI works well and is highly reactive, if a bit supernaturally accurate even on the standard accuracy setting.

I have only two real issues, and they’re both to do with the visuals. One is that, with there being different terrain elevations, it can be hard to tell when someone is on a hill, as the area more or less looks flat. That’s pretty minor, however, and should be fairly easy to rectify. Another issue is that it is incredibly easy to lose track of where you are, even with a yellow circle around your character, and I would say that the number one cause of my deaths is losing track of where I am in relation to the enemy. Maybe it’s just because the game feels a bit too zoomed out for me to always know what’s going on. Either way, it’s something to bear in mind. Running With Rifles is still in early beta, with €5.25 getting you access to the beta and all future updates. There is a demo that is a few versions old, but purchasing gets you the latest build featuring a new map, tweaks and fixes, and online multiplayer. Do I recommend a pre-order? Yes. There’s a lot here to like already, with more coming all the time. Even if you think you may not like this sort of thing, I would still recommend keeping an eye on it.

One thought on “What’s All This Then? – Running With Rifles”