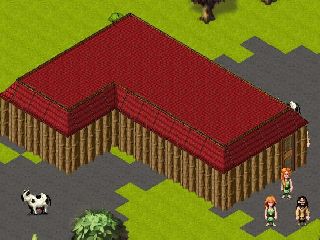 Hello! Welcome to ‘What’s All This Then?’, a weekly* column** where Lewis looks at upcoming indie games***.

Towns, or Tahns, if you’re a Cockney, is a city-building/management game by SMP Team. It’s been described as Sim-Tristram. Now, see, doesn’t that sound good? Because it does sound good. In Towns, you play as an oddly-disembodied mayor, or possibly deity, who starts off with a small band of settlers who have to be ordered to cut down trees and build things, because they’re damn-well not going to do it themselves. The lazy monkeys. To begin with, it’s very reminiscent of Dwarf Fortress, even down to the party of seven settlers you start off with. However, and certainly blessedly, Towns is much friendlier than Dwarf Fortress (it’s even got graphics!). The UI, currently, is still a mess of DF-esque hotkeys, but this will soon be a thing of the past come the next update.

If Towns were just a city-builder, it wouldn’t be particularly noteworthy or interesting. Therefore, it has a few tricks up it’s sleeves. Do you remember how, in Diablo, there was this stonking great dungeon under Tristram? Well the settlers in Towns have decided to build over a dungeon themselves. Why? Well, the developers have the answer:

Why is there a dungeon right where they decide to build their settlement, isn’t it kind of counter-intuitive of them to do so? So, you’ve built a town over a dungeon. You’ll need stone to make most of the buildings, and that means mining. So you order your little settlers to make a hole in the ground and stick a ladder in it. You’re now able to shift your view underground, and order your little people to dig. And so they dig. If they feel like it. Much like in Dwarf Fortress, you can’t control anyone directly. Instead, you must create orders and designations, and hope the townsfolk do what you tell them before they’re eaten. Happily, there’s already some cruelty potential, as you can command them to dig into the river, drowning them all. That’ll teach them to ignore the great big hairy spiders.

You can craft weapons and built a military, but a much more interesting upcoming feature is a hero system, which works like Majesty. it is planned to have heroes wander into your town to fulfil their needs. Maybe they want a drink or a meal at the local tavern, or they need a potion from the apothecary. You’ll be able to create quests to entice the heroes to do things for you. Clear out a dungeon level so you can expand or collect resources, for example. It’s essentially a reverse-RPG where you control the town the hero frequents, rather than the hero.

There’s also a custom building-system, so you can have a town with a coherent architectural style. Or, failing that, I suppose you could have a town full of penis-shaped buildings, but I’m sure you’re all more mature than that. Towns is available to pre-order, which gets you the game for half-price (currently €7.50) and all future builds. Free players will likely have to make do with the current alpha build. From what I’ve seen so far, and from what the dev-team have told me, I heartily recommend pre-ordering if this is something you think you’d be interested in in the future.

*Every Monday unless Lewis is really hungover, doesn’t have access to the internet because his ISP has turned him off again, on holiday, in hospital, in prison, or dead.

*** One game a week. One. Otherwise he’ll run out of games to write about and then you’ll all be very sad indeed.

One thought on “What’s All This Then? – Towns”