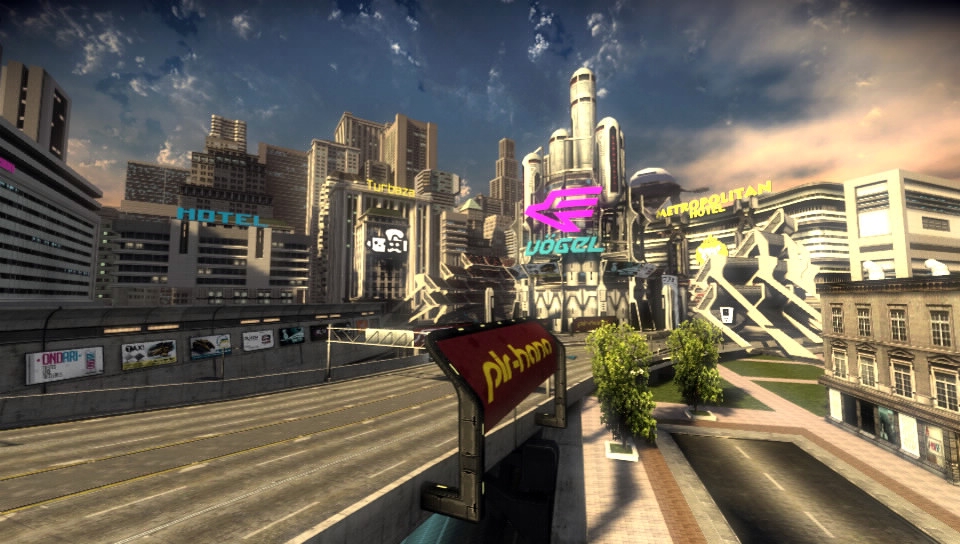 One of the Vita launch titles I was most looking forward to playing was Wipeout 2048, and when I received it as a birthday present last weekend I was over the moon. I slotted the dinky little game card into my Vita and watched the opening video with a smile plastered on face. The video shows the development of racing in the Wipeout canon from the point of view of the Feisar team with cars from the early 20th Century, present day Formula One style cars to early futuristic racing cars and finally, a glimpse at the racers from 2048.

With the game set chronologically before other titles in the series, there is a distinct visual change to the tracks compared to Wipeout HD. In 2048 the Anti-Gravity Racing League is clearly in its early stages of development, as is the technology surrounding the racing. Gone are the futuristic tracks which take place entirely on dedicated anti-grav tracks, in comes a sense of the real world as events take place along every day roads and through public parks. It is a lovely change for the series and provides a connection to the real world as you race past lakes and trains. With tracks sweeping underground, at street level and above ground you get a real variety to your races. It is all presented exquisitely on the Vita and is probably one of the best looking launch titles there is. There is little difference in the visuals between 2048 on the Vita and HD on the PS3, it really is a testament to the power of this device. However, it must be noted that loading times are quite slow which is a bit disappointing.

You have three control schemes to choose from, the first is the classic Wipeout system with the face buttons controls thrust and weaponry with the air brakes on the bumpers. Then there is my choice known as Racer where the right bumper controls thrust and weapon options are mapped to the face buttons. The final option makes use of some of the Vita’s fancy features, called Touch and Tilt you use the rear touch pad to control thrust, the front touch screen has points to absorb or fire weapons and finally, you tilt the entire machine to steer your craft. It is a great use of the Vita’s standout features, but the more traditional control schemes are much easier to use and have the added bonus of not making you look like a horrendous douche when playing in public.

The single-player campaign takes you through a series of events with numerous optional events splintered off which give you the chance to earn PS Trophies and unlock new ships. Progressing through the campaign requires a simple pass, with the requirements for a pass listed at the start of an event, but if you want the extra XP and the chance to rank up faster, you will want to get an Elite Pass. The usual array of game modes are present; race, time trial, zone and combat. Each of the five teams have a vehicle designed for certain event types with Speed, Fighter and Agility racers along with a prototype vehicle unique to each team which can be obtained by completing Prototype Ship Challenges which unlock at every 10th level. There are numerous events in the online campaign (accessible via an online pass) where again, you complete set objectives to unlock the next node on the campaign route. The race types are not fixed for each event, so you simply turn up into the lobby and complete the objective that you are set. You can also take part in ad-hoc multiplayer events without using an online pass, this works by connecting to players in your vicinity. It has been an empty place when I have gone in there. The final game mode is Cross-Play where you might find yourself pitted against a PS3 user, I did this once and found myself on what looked to be a Wipeout HD track with one other person. It was a bit random, but a cool feature to play around with.

Wipeout 2048 is an outstanding game on the Vita which embraces the history of the game series, and the technology of the Vita to give you a great racing experience. If you have a Vita, but don’t have Wipeout, then give serious consideration to getting it. You’d be a fool not to.

Visit this page for more info on our scoring policy.