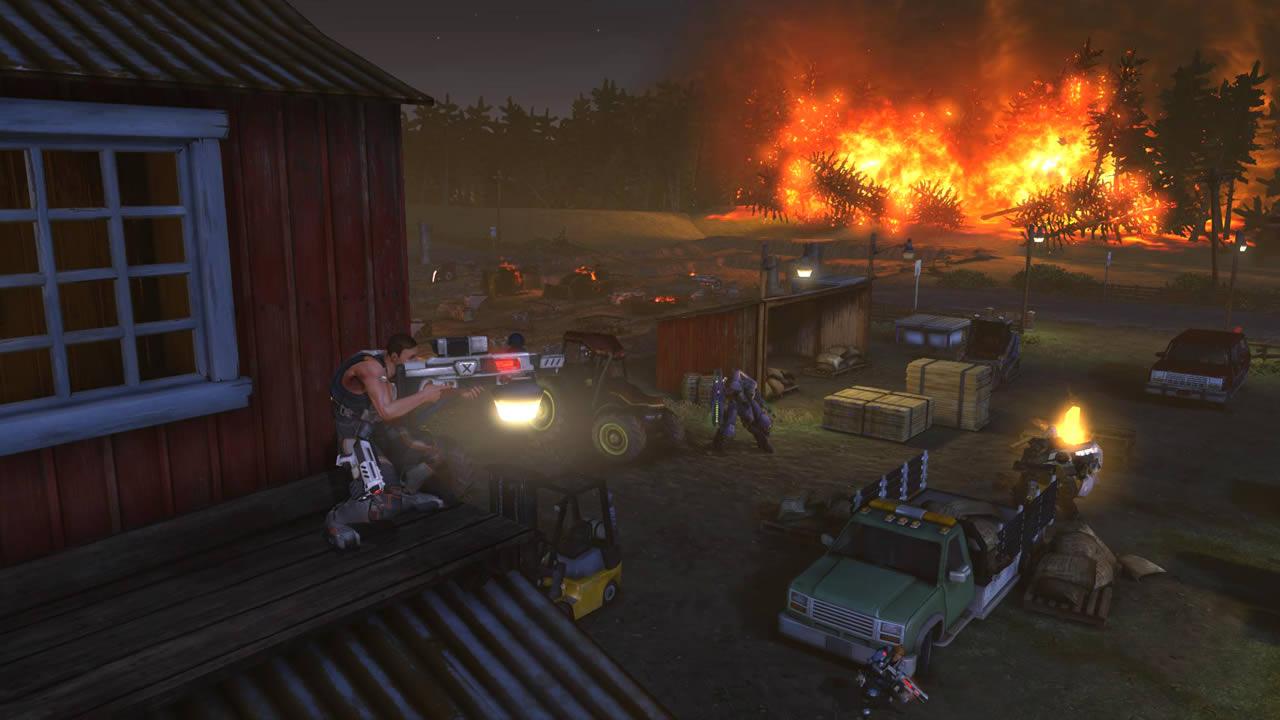 To recap from part two… Steph is on the floor of a railcar bleeding out. Jordan has a hole in his chest, slightly dead, and Chris has also bought the farm. Which is a shame as he was due to get a promotion soon…This leaves Nick, a 25% chance shot, 2 rather unhappy Thin men and two turns to save Steph.

Does Steph survive? Can Nick score with the 25% shot? Hit the break to find out.

The shot hits! It was a literal, erm, 1 in 4, but now there’s only one Thin Man left. Shots are exchanged, but to no avail. The clock ticks down, so I move Nick around the flank on the hope that I can somehow get the Thin man on my next, and Stephs last, turn. I put him in overwatch and wait.

Amazingly the Thin Man makes a run, trying to flank and Nick, awake to the danger, plugs the last alien with an expert reaction shot. That’s three kills for him in one mission and more importantly he saved Steph. Mission over, bombs defused, two team members dead, but in the strange way that only an XCOM game can work as it still feels likea victory for getting Steph out alive.

There are still, inexplicably, two days until my cyberlab is ready, so I spin the mission control wheel until it’s ready…ignoring one mission in the process…

Huzzah, it’s ready. I open it up, and select Nick (of course) to be ‘upgraded’. Upgrading here involves cutting off his arms and legs, without anesthetic (budget cuts you know). On the plus side he now has a massive mech suit. As for the first upgrade it’s a toss up between a flamethrower and mighty punching fist, so I obviously go for a mighty punching fist.

What?! Five days to install? Seriously? So I spin the mission wheel putting the answer phone on while I wait for Nick to get his shiny backside out of the workshop. He’s been different since we butchered him and stuck metal limbs on…it’s almost as if he’s upset about something. No matter i’ve got missions to do, people to save, teammates to upgrade.

I think I’m getting away with ignoring all the alerts when a message pops up informing me that Japan and South Africa have left the council…maybe I shouldn’t have ignored all those missions after all.

Another spin and an Abduction mission arrives, and given that I am desperate for a new satellite nexus and that i’m really low on engineers, I opt for a difficult mission with 4 engineers as a reward.

It’s another new level. I seem to be  in the outskirts of a building site, and i’m told that there are multiple x-rays. There are two Meld cannisters, so I set to work with purpose. I fan out as usual and a central pit is discovered in the level with a Meld canister inside. Anyone in there will be in a terribly exposed position, so obviously I send Steph in. As cover, Nick moves around the right hand perimeter and Jordan around the left. Nick very quickly uncovers the Meld, with five moves left; I send Steph to it, using it as cover, while Nick provides fire support. No sooner has Steph moved when two Sectoids spawn. This unfortunately reveals the second Meld cannister, with only rwo moves on the timer. There’s no WAY I can get to that in time, so I send Nick over to the first Sectoid to try out the fist.


I mean I was tempted by the flamethrower for sure, but I definitely made the right decision. The sectoid is punched, bodily, through a wall and into the central pit. I’m unable to suppress a giggle. Now I may be imagining this, but the other sectoid certainly looks a bit more edgy now. In response however the same sectoid, ignoring the giant stompy mech next to it, shoots at Steph causing the Meld cannister to rather surprisingly explode, violently. Steph is wounded in the process. Whether from the plasma or the explosion, I can’t tell, but she’s down to one health point and I have learnt a valuable lesson – Meld is fragile and goes boom. The misison carries on and I manage to clear the area with no further causalties, minimal injuries and Nick punches two more aliens to death.

Back at base I build a power plant to allow me the juice I need to build the badly needed satellite nexus. To do so though I have to spin the mission wheel and as a result I lose China, India AND Australia from the council…got to stop doing that.

I return to the mission wheel again and i’m given a council mission. You can’t really skip these, so I jump to it. A convoy mission you say? Suspicious human activity you say?? That’ll be the Exhault I say. Pardon? The council-man says. Nothing, I say, and try to look busy…

I jump straight into the mission. Steph’s injured, so insteps I, your intrepid writer, to show the team how it’s done.

The council mission starts and it’s clearly another new level. I’m enjoying the frequency of new vs old here, and I start to move through the building as the level appears very narrow and long. I fight my way through light resistance and uncover a solitary human ‘survivor’ who we have to escort back to base. No sooner has the order been issued than I am informed that hostiles are incoming. Now usually that just means a lot of Thin men on overwatch, but this isn’t the case in Enemy Within. They start on overwatch sure, but then they hunt you.

Unfortunately for the team, we’re quickly overwhelmed with at least 8 new arrivals, all constantly moving around, all shifting lines of attack and all very, very accurate. Ironically I’m the first to die. A Sectoid jumping off the roof into the middle of us, shooting me in the back of the head. Plain rude if you ask me.

Jordan follows shortly after, caught in a maelstrom of direct fire from at least three different sources, he didn’t stand a chance. This is bad; One enemy turn and i’m already down half a squad. I rally as best I can; sending Nick running into battle. He’s obviously upset as he punches a Thin Man so hard he flies through the cover a sectoid was using, exposing him for Andrew to kill with a straight shot.  You cannot imagine the size of my grin. Another few turns are exchanged, with two aliens killed by Nick (one on overwatch with his vicious Gatling gun), and one by Andrew before he is then hit and killed by a flanking Sectoid. It’s almost impossible to hold any sort of line against this many moving enemies without an embedded defensive position. Unfortunately I was in the process of moving the team across the map so was always fighting to recover my position. Defeat was inevitable. Nick, the new cyber-legend he is, manages to take out another two before he is killed. It took four enemies on overwatch in what can only be described as a tornado of plasma fire to do it, but he goes down. He then explodes in what i’d like to think of, as a melancholy way. To add insult to injury a Thin Man then pops up out of nowhere and executes the civilian. Mission over. Whole team killed. Oh dear.

That leaves Steph back at base.

>Once she’s fit (i’m spinning the mission wheel to get her into a state to fight, ignoring all missions until i’m ready) I decide to build a genetics lab and see if I can upgrade her. I eventually succeed (only losing two more countries in the process) and give her upgraded sight (+10 aim) and health regeneration (alien bone marrow, apparently) . Unfortunately i’m bound by my original constraints and can only use Reticule writers. So, unfortunately Steph i’m afraid, next mission you’re on your own.

Part 4 coming soon. Will Steph save the day single-handedly??? Only time (and I) will tell. But let’s face it, you can probably guess.